Netflix has a bunch of Mario Bava films available, which is great, but be aware that one of the offerings,  Black Sabbath, is a mostly bad cut of a really great anthology.

The colours and visual style of “The Telephone” mark the start of the giallo subgenre.

In Italy this film is known as Three Faces of Fear (I Tre Volti Della Paura), which is the version you want to find. To make things more confusing, I’ve seen editions of “Black Sabbath” that are actually the “Three Faces” cut (the Bava box set comes to mind).

Most importantly, there’s a segment called “The Telephone” that is really butchered in the American version that you see on Netflix right now. In the original Italian version, you’re watching the birth of the giallo film. There’s a psycho-sexual element to it, a broken lesbian relationship, and the main character is a prostitute being stalked by her former pimp and lover. The story takes place almost entirely in her apartment, and there are some pretty nasty scenes. In the American version, the protagonist is a girl home from a date, she is being stalked by a ghost, and she receives a “magic letter” where writing appears before her eyes. She also has a nice neighbour who is out walking his dog who plays a part in the story now. It doesn’t completely make sense.

Worst of all, the original musical score is re-done with a shlocky alternative. The Italian version of the film has a really great subtle soundtrack (as opposed to the less than subtle direction Argento and Goblin would take the soundtrack style for the sub-genre later on) and some excellent sound design that is lost in the American version. 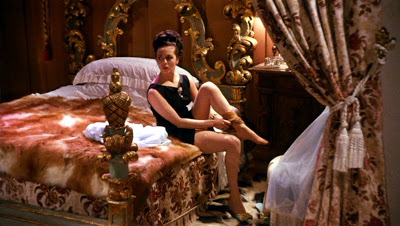 The Bava Bed in “The Telephone”: this bed appears in about 6 Bava films.

Fans of giallo will be robbed the opportunity to bear witness to the birth of the subgenre, so you might want to reconsider watching the version on Netflix.

The stories themselves are also re-ordered throughout the entire film. In the Italian version, the most powerfully frightening sequence (“Drop of Water”) closes the trilogy, while in the American version the more intense tale starts you right off. I prefer the steadily ramped up intensity you get with the Italian edition over the pacing of the American version that lets you recover from an initial shock.

It’s not all bad news though. The cut on Netflix has one advantage over the Italian version. Karloff’s performance in “The Wurdalak” segment is preserved. In the Italian version, you can’t really make out Karloff’s performance. The American version also has more Karloff intros, but I’m not convinced that they make the film that much better. The Karloff Outro in the Italian version is much superior to the added intros on the American version and displays Bava’s sense of humour and fun. Bava raises the curtain, breaks the fourth wall, and reveals himself as the welcome manipulator of our understanding. I’d take that over the added intros any day, which were added to more closely mimic popular anthology TV shows such as “Alfred Hitchcock Presents” and Karloff’s own “Chiller”.

All that considered, Black Sabbath/Three Faces of Fear is a really great film (“Drop of Water” is one of the scariest things you’ll see on film) and you should check it out: just start with the better Italian cut first instead if you can. 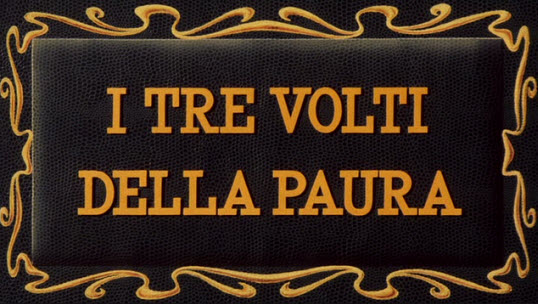 What you want to see at the start of the film.

(Netflix also have House of Exorcism up there — my advice is to watch Lisa and the Devil instead and pretend House of Exorcism doesn’t exist: they’re the same film recut, and while “Lisa” is a great film, “House” is a recut version that attempted to cash in on The Exorcist and utterly fails while butchering a great film in the process)

As always when I talk about Bava, credit is due to Tim Lucas for his exceptional commentaries on Bava’s films and his book on Bava (All The Colors of the Dark) which is now available in an affordable and media enhanced eBook format from the new Video Watchdog app for Apple devices (I’m not aware of Android alternatives).